What To Do In The Event Of An Acid Attack

Acid attacks are not new. Acid attacks have been widespread since the 1990s in India and South East Asia, particularly targeting women, with 3,512 attacks in Bangladesh alone between 1990 and 2013. The acid attack on Katie Piper in 2008 was widely reported in the UK media and currently we are seeing a sudden rise in this type of attack in London and other European cities. Since 2017 there have been over 1,800 incidents involving corrosive substances (1, BBC 2017).

So what are our “Actions-On” should our Principal or colleagues become the victim of such an attack?
The first action is always to manage your own safety. It should be a no-brainer. The first step of every civilian First Aid protocol is “Danger”. The first action in the US Tactical Combat Casualty Care treatment protocols for care under fire is “Win the fire-fight”. It is not possible to deliver effective care whilst all parties are still exposed to the hazard or threat. But in the context of acid attacks that doesn’t necessarily mean take on the assailant…
The typical behaviour patterns of acid attacks differ from traditional physical attacks – armed or unarmed. The modus operandi has been ‘hit-and-run’, increasingly by motorbike or moped and usually targeted, individual attacks as opposed to groups of people or sequenced attacks.

By the time the event has been registered the assailants have usually fled the scene. The remaining danger is the chemical present on the casualty, on their clothes and surrounding area.
If your casualty runs towards you, holding their face, screaming in agony, desperate for you to help them, the best thing you can do is push them far away. Until the situation has been assessed you want as much distance between you and the casualty as possible, cross contamination will cause further injuries to more people.
Once it has been established you are dealing with a chemical attack the next step is to irrigate, as quickly as possible for as long as possible. With whatever you have.

The single most effective treatment for both acid and alkali burns is water. You will not be able to identify if you are dealing with an acid or an alkali so don’t even think about ‘neutralising’ the chemical.
Whilst dilution of an acid, especially those with a pH of 2 or less can generate significant heat, both acids and alkalis will eventually dilute. As such the best pre-hospital treatment for all corrosive substances is Irrigation, maintained for at least 30 minutes. (2, Tintinalli, Judith E. (2010))
Prompt irrigation is the most effective treatment for burns; patients who receive irrigation within 10 minutes had a 5-fold decrease in full-thickness injury and a 2-fold decrease in length of hospital stay. (3, Leonard LG; Scheulen JJ; Munster AM (1982))
Irrigate the area with low pressure, high volume water. The water does not need to be sterile, but it should be cool and copious.
Cling Film is an appropriate treatment for all burns, providing a sterile, airtight barrier to infection and preventing fluid loss which has been seen to reducing scaring. The danger when dealing with chemical burns is the chemical melting the cling-film. Cling should be applied but only after the wounds have been completely irrigated.

For the casualty with multiple injuries your priorities are burns to the:
1. Nose and mouth
2. Eyes
3. Hands
4. Any other body part.

Care in the streets

In a domestic setting, get the casualty into the nearest building where the wound can be irrigated under flowing water. For whole body burns the casualty will need to be under a shower. Hypothermia is a cause for concern but this is secondary to the initial injury.
If the attack happens in the street, get the casualty into the nearest building where their wounds can be irrigated under running water. If this is not possible you may very well be limited to bottled water – do not underestimate how much water you will need; a litre bottle of water can be emptied in much less than a minute meaning you will ideally need at least 30 litres of water. Will you realistically source 30 litres of bottled water? Probably not. Beg, borrow or steal as much water as you can. 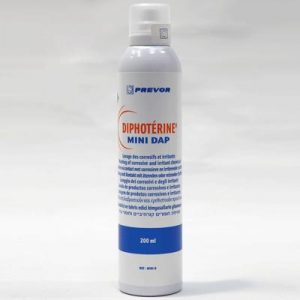 ur First Aid Needs Analysis suggests: (Where there is NO water), Diphoterine® should be considered as part of your Medic kit when operating in Central London or other European cities with HNW clients. Diphoterine is an amphoteric irrigating agent for the treatment of chemical burns, which can, impressively, neutralise both acids and alkalis, can be used in the eyes and is non-toxic.

A retrospective study has shown that Diphoterine is able to neutralize pH values to a reasonable degree but without significant difference in the time to healing, the length of hospital stay, or need for surgery (4, Zack-Williams SDL, Ahmed Z, Moiemen NS (2015)). As such the primary treatment of both acid and alkali burns should be copious irrigation to dilute and remove the material in the first instance followed by Diphoterine if available. If no water is available Diphoterine should be considered as part of your First Aid Needs Analysis.

If you would like to find out more about our training courses, please contact training@ExcellentiaGlobal.com
Adam Gent, Medical Instructor, Excellentia Ltd